It would be funnier if...

It would be funnier on the big screen with popcorn and a credit reel.  It would be laughable if the genre fell on the fiction shelves.  Not so funny at the podium of the U.N. General Assembly.
According to Iranian Present Mahmoud Ahmadinejad, its time to set the record straight, informing us all that the U.S. arranged the 9/11 attacks to “save the Zionist regime”.  He then called on the United Nations to establish an “independent fact-finding group” to investigate the attacks. Were I there, I would have followed the footsteps of the U.S. delegation who walked out of his speech, along with all 27 European Union delegations, Canada, New Zealand, Australia and Costa Rica.  I’m wondering who was left? Did he finish his ranting to an audience of reporters?
Were I a reporter at the General Assembly, I might have a few questions for Mr. Ahmadinejad. 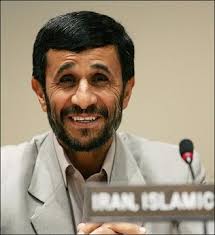 A) If this is true, wouldn’t it have been wiser for us to stage the mass murders on foreign soil so have our own citizens? Or at least set the attacks at a location that wouldn’t cause so much chaos and disruption...like the middle of nowhere?  B) How exactly do the 9/11 attacks relate in any way to Israel and supporting them? I’m not the most politically savvy, but I’m failing to see the connection.  C) Is he not aware that there were extensive ‘fact-finding groups’ following 9/11, which led to a war that we are still fighting (we’ll leave the discussion of the accuracy of those groups for another day...) D) Could you comment on the irony of your speech taking place not far from where Islamist terror attacks destroyed the World Trade Center towers 9 years ago?
E) Were you dropped on your head as a small child, or take medication for the voices you must hear in your head??

The outrageousness would make me laugh were he not the president of a state with nuclear powers and sitting too close for comfort to Israel.  It would be funnier if this weren’t real life...
I’m not laughing.
at 11:21 AM