So this hallway that I’m living in (when one door closes, another one opens, but it’s hell in the hallways…), it appears that I would have been in it one way or another. Perhaps the world is more well-managed that I thought. Unanswered prayers…so interesting when the one thing you thought you wanted; the one thing that if only you had it, then life would be so much better; the thing that would make everything easier, brighter, under control – it turns out that it was a blessing in disguise not to be granted that wish.
Being somewhat of a control freak, I like to have a plan. I like to understand why things turn out the way that they did and what I need to do to move forward.  At the end of January, I lost my job and for the life of me, I couldn’t figure out what had happened.  I spent endless hours combing through the details – where did I go wrong? Where did I screw up? What did I say/do/think that caused this to happen? And it wasn’t that I wanted it to all be my fault, but I would rather think that there had been a specific mistake that caused this misery than sit with the ambiguity of a situation that didn’t make sense to me.  Not being such a master of living in the gray, I tried to think my way out of the mess, which resulted only in getting lost in the dangerous neighborhood of my brain.
Plus, if I could just figure out what I did wrong, then it’s within my power, my control, to fix it. I can make sure I never do it again. I can apologize. The world can still seem orderly and neat, like the books lined up on my shelves alphabetized by author and genre. But alas, the world’s bookshelves seem to be organized by children, often stuffing mystery among romance and poetry in with the magazines. 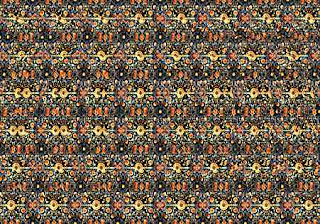 And yet, perhaps, in all of that chaos, there is a beautiful order, a method to the madness that we can only see when we step back far enough to appreciate the symphony of color and allow the full picture to come into view – like those posters we used to love made up of dots that you had to let your eyes glaze over in order to see the hidden picture.
And so the job that I hungered for, the company that I ached to work for – believing that life would be ok if I could just be there- the company has just shut down. Two months after losing my job, all of the employees are job-hunting.
And true to form, I try to figure out what the lesson is here, what the hidden picture is trying to tell me. But maybe the lesson is simple – I don’t always know what’s best for me, and the things that I wish for might just be the very things I would be better off without.
Unanswered prayers in a well-managed world…it takes a leap of faith to believe that there is a master plan and synchronicity, but in the absence of any other answers, I’ll jump.
So for now, I’ll keep pacing the hallway, on the lookout for opened windows and doors; putting one foot in front of the other and letting go out the outcome. It’s time to have a little faith…
at 12:06 PM