Where heaven and earth touch

I can hear it in his voice – a wisdom, a deepness that seeps into his words, alerting me to the fact that something special is occurring halfway across the world. The words are no different from any other Friday afternoon – the voicemail wishing me a ‘good shabbos’, telling me he loves me…and yet, today, this message is infused with spirituality, sent not from the car on his way home from work but rather in a city that bustles with preparation to welcome to Sabbath queen, from Israel – the land of freedom.
And nothing gives me more joy than listening to his message. 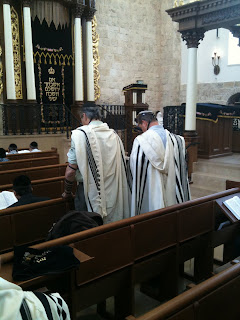 I got an email from the rabbi accompanying my father in Israel, with a picture titled "Where Heaven and Earth Touch".  Perhaps he meant Jerusalem, the city where heaven and earth touch. I heard it differently. I heard it as watching two men, both of whom have made quite the spiritual journey to live the religious life that they now do, pray in an ancient synagogue - heaven on earth.
My dad, the one who would go hiking while we went to shul on Saturday mornings, the one who hungered for bacon and eggs if we went out for breakfast, the one who was raised in an orthodox Jewish home and then moved across the country to build a life that bore no resemblance to the one he had come from. My dad seems to have grown into his skin. He fills the shoes of those who walked before him and he has discovered the beauty buried within the traditions and rituals that he practices on a daily basis.
I’m often asked what it’s like – being raised as a rather non-religious conservative Jew – to now have orthodox parents who keep strictly kosher and don’t drive on shabbos or turn on the lights, who study with a rabbi every week and are more involved with the synagogue community than any other. And sure, there are things that take some getting used to – and the day that my mom starts wearing a wig or my father grows peyis, the long curls by the side of his face, I’m sure I’ll have a moment of panic. And let's be clear - my father is not a saint, and there are still rituals that he balks at - not necessarily ready to give up going out to eat with his buddies or trading walking on the treadmill for morning servies.  But mostly, this shift into orthodoxy - it brings me joy.
It brings me joy to watch my father rush off to shul rather than off to the hospital to do rounds. It brings me joy to listen to the passage that he studied with the rabbi and his thoughts on it. It brings me joy to hear the humility mixed with spirituality in his voice when he tells me “the world is well managed” – this from a man who used to announce his disbelief in G-d with pride.
And, not surprisingly, he is returning to his roots – resembling his orthodox father more and more by the day…but not the father from childhood he remembers: demanding, punishing, disapproving, but rather the grandfather I knew, the father he met in older years. The grandfather that donned tefillin every morning and prayed as he welcomed in the day. The grandfather that held my hand and pointed out the different plants and trees on our walk through the park. The grandfather that survived unimaginable horror and still believed, who loved with a whole heart and when he spoke in his soft voice, we all leaned in to listen.
Today, when my father speaks, I lean in; anxious to learn from him, to share in his journey, to let him know I see this man he has become, and even if he didn’t hear it enough growing up – perhaps he can hear it from me –
I have never been prouder of the man, soul, father, friend that you are. Good shabbos Dad.
at 11:34 AM