She did knit blankets and clip coupons.  She did rinse off the tin foil and save used wrapping paper, backed by stories of the Depression and “When I was young…”  She did bake cookies, whipping out the Windex for glass table fingerprints before we could finish the last bite.  So as far as the “Grandmother” criteria, she earned the title.
However, she also called me ranting about the latest Brittany Spears debacle and had a closet packed with the most fashionable shoes.  She drove her red jaguar slowly through the Scottsdale streets as she treated me to frequent movie dates. She accessorized her jogging suits with spiffy high heels, and never left the house without her jewelry securely fashioned and political opinions stashed in her purse. 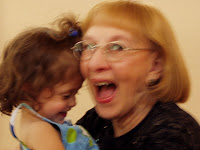 We had our own book club, pompous in our ultimate review of the books we traded and dog-eared.  She taught me how to play card games and the thrill of filling in the final crossword puzzle word in the Sunday paper.  She smiled sweetly in mixed company, but it was after the sharp joke she would have cracked, reveling in the laughter around the table.  Somehow, even at 85, she held on to her spark, her humor, her questioning mind and her desire to be a part of the world.
When her beloved husband died ten years prior, she could have hung up her heels and locked away her jewelry, content to sit at home amidst the company of television and old photos. She could have dropped out of her bridge group and stowed away her golf clubs.  She could have lost her grip with fingers pruny with past memories and whiled away the present.  But she didn’t.  She mourned as she stretched to find a new way of making a life without Zaidy Charlie by her side. She grieved every day, but she learned how to access her smile and the motivation to live rather than merely survive. I know she ached with his loss, and she honored his memory by living well.  She showed up in her life, a tribute to their joint strength, and ruled as matriarch with red lipstick and glory. 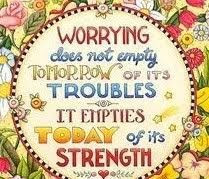 She believed exercise would kill you, armed with articles on skiing deaths and running injuries.  She scoffed at worry with “90% of what we worry about never happens” and shared her marriage guidelines of “Never go to bed angry” and “When you fight, never bring up the past”.  But mostly, Bubby Ida’s wisdom came in doses of kindness, unspoken love that wafted into my heart.  She infused phone calls with unwavering faith, transmitting her confidence between her words.  I knew she believed in me by catching her eye, the glint of pride and adoration welling up behind her lids.  Soft touch, an absolute support in my endeavors, balanced her sharp wit.  She showed up for me, flying on a propeller plane to Abilene, Texas, for my college graduation, less interested in the new geography than with the road map of my life.

She didn’t beat around the bush, and there were times when I would have been happier with a little less advice.  But her commandment-ish guidance lacked any sting of judgment. Rather than growing narrower with age, she gathered her family in with an open mind and forgiving arms. She responded to coming out confessions with hugs and incorporated divorce, addiction, and depression into her lexicon.  She wasn’t a saint, and hidden under masks of bravery, fear and pains of loss laid their seeds.  She spoke of few regrets, but in her dismissive nonchalance, I hear her unanswered prayers.  Still, understated confidence boosted her faith, and she steadied me with her assurances of happy endings.
She shared stories of her childhood, tinted with a reluctance to criticize her parents, even when describing how she wasn’t allowed to continue on in school because the money went to her brother’s education.  She told tales of determination and commitment, teenage jobs with paychecks to buy her younger sister piano lessons.  She unwrapped tokens of loyalty and devotion, visions of a long-distance courtship and stacks of love letters.  She laughed over mother-in-law dramas and the perils of early marriage with no money and a new business.  I still giggle over the creative uses of saran wrap and grin with echoes of my Bubby who “gave up a great career to be a mother!” She whispered the fire of her love for her husband, the breaths stolen and confidence gained with him by her side.  The way she said his name, Charlie, like a lingering caress, sharing the teenage romance of their blind date and the fifty plus years that followed. 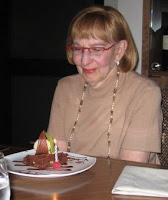 She taught me how to compromise without surrender and how to love stirred with anger. She exemplified courage, opting to battle cancer, and peppering visits with humor and current events rather than a catalogue of her ailments.  She suffered a loss of privacy, independence, and a disintegrating body, yet kept her dignity perched behind her ear. She chose words of love over laments, and sent me home with care packages of adoration to be doled out when she was gone.
I found saved notes from her this weekend, stationary etched with old-fashioned cursive that I held to my nose, hoping to stanch the ache and catch a whiff of her Escada perfume. I keep the letters amidst old photos, a poor substitute for her hand to hold and eyes to catch.

I miss her knowing glances and the peak of her laughter ringing above a crowd’s din.  I miss her distraction on the phone if I called during “Judging Amy”, because, “Lauren, yes I love you, but I love Amy too!”  I miss her squishy gushy elbows and wise eyes. I miss her faith that I was ok, and willingness to see the best in me when I was blind. I miss her quiet acceptance and our jokes about dropping off her wig at the hairdressers to save time.  I miss knowing that, inside the house on McCormick Parkway, there’s a woman who makes my life sweeter by breathing, and who loves me more than I deserve.
I miss my crossword puzzle partner.  I leave the last clue blank, my tribute to the woman who helped me answer my life's puzzles.
at 4:51 PM