Shiva for What Could Have Been I could have related the facts, explained that Tisha B’Av was the day of mourning, grief over our temple destroyed.  I could have recited details of rubble and fasting obligations, but it would have been dry-eyed.  Ok, so the temple was destroyed...sure, not the perfect outcome.  But couldn’t we build another? Were we really to mourn for generations to come over broken bricks and fallen walls? I was told it was the ‘Saddest Day of the Year’ and I sat in ignorance.  Maybe I wasn’t moved because I have never been to Israel, never kissed the soil and connected with my homeland.  Partly I didn’t grasp the meaning of the temple. It wasn’t the destroyed structure that we mourned, but rather the loss of Hashem’s presence, the loss of our leader, our father, and our mentor holding us up.  But still, I had some sticking points. 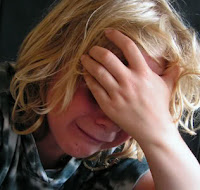 The story of Hashem claiming that because the Jews cried ‘false tears’ over imagined defeat they would cry for generations just didn’t sit right.  We were scared.  We were unsure of the future.  How could this kind and ever-loving G-d punish his people for their weeping?  And not only those that cried, but generations to come? It just didn’t fit.  It fit with the destructive and punishing G-d that some believe in.  It fit with the unknowable angry ruler who demands perfection, but it didn’t fit with my comprehension of G-d who loved like a father, and cared about even the smallest hairs on my head.  It didn’t fit with the Creator who yearned for joy and craved meaning for his children.  It just didn’t fit.
And so, I would have crossed off Tisha B’av on the calendar, merely another Tuesday, missing the call for action that the holiday screams for.
But today I glimpse a new snapshot of Tisha B’av.  Hidden beneath the facts and historic details lie the treasure of meaning.  There is another perspective, another interpretation, and another translation of the Hebrew that urges me to rend my clothes.  Hashem isn’t punishing the Jews for crying or fear.  They were distraught because they thought they were weak, believed that they would be destroyed, even though G-d had told them they would conquer.  Hashem is teaching us that our ‘false tears’ will be the cause of our destruction and downfall for generations, not because He is punishing us, but rather because we didn’t believe – didn’t believe in ourselves, in Hashem, in our gift of greatness.  We will weep for decades because of what we could have been, the missed successes and lost kindnesses.  Our own hands punish us, keeping ourselves locked in small lives, carving away glory with every doubt and worry.

Tisha B’av becomes a Shiva for what could have been, grief for the happiness we turned away from, tears for the challenges we let our fears evade.  It isn’t punishment from the Almighty, it is self-induced suffering; a lack of faith, a declaration of ‘I can’t’ that results in our perpetual wandering, grieving with no temple as anchor.  And as always, I find the answer in a faith that I can’t always grasp.  Faith becomes the antidote to tears, belief that the net will appear if I step off the cliff unlocks my doubts and arms me for battle in life’s mountains.  Apparently, Hashem wasn’t so disturbed by the false tears as by the doubts in his assurances, the lack of faith in themselves over the belief in His promises.

And within this explanation, I find something to mourn.  I relate to ‘what could have been’, the squandered potential, and cast-aside greatness.  I am familiar with fears that dictate actions and destruction brought about by my own hand.  I infuse doubts into challenges and lean on worry to avoid success.  I have turns away from glory, spurred by my fictitious smallness, my idea that I wasn’t good enough, deserving enough, smart enough...wasn’t enough.  I ignored assurances from those who had gone before, and debated faith with my mentors.  I nodded at pep talks but chose to belief my own narrow eyes, opting not to try in favor of failure.  I too need to sit Shiva.  I too must grieve the lost years and buried happiness.  Suddenly, Tisha B’av becomes personal, a wake-up call to faith, a nudge to action, and a commandment to believe.  Tisha B’av becomes a whisper of confidence, tears shed and then left behind, with the option to live better, dream bigger, and snatch tomorrow’s ‘what could have been’s’ as today’s opportunities.

This year I cover my mirrors and don black.  May next year my Tisha B’av require fewer tears and find us all living the lives we could have lived.