Waiting for faith before taking the leap

Don’t touch.  Hands in your pockets! Fighting my urge to embrace my mentor, I watched him approach the Starbucks table, armed with pages of wisdom and faith.  He was my Orthodox Rabbi, suit clad even in 115 degree Phoenix summers.  He was my Rabbi, and we met to study, pondering life’s questions and seeking truth over iced coffee and air conditioning.  I toted my leather-bound texts, books that increased my intelligence simply by sitting on the shelf.  I scribbled in margins and underlined with question marks, searching for the words that would make me believe, words that would propel me into a faith rooted in surety. 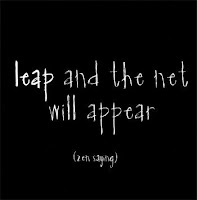 I asked him questions that his 5 year old daughter could have answered, exposing my ignorance with simplistic ponderings, trying to solve gray gaps from an academic perspective.  I wanted to know before I acted.  I wanted to see the Promised Land, to taste the sweet laughter before I made any changes in my life.  I wanted the rewards before I did the work.  I wanted to see the net before I took the leap.
We met each week to study, him focused on the writings we had chosen, I measuring his smile.  I was a student of his faith.  I watched for fulfillment, a joy that seeped beyond his sermons and into the walk from his car.  I watched his eyes for shadows and memorized the cadence of his voice, judging happiness and seeking proof of a life guided by deeper meaning.

He had what I wanted.  I was pretty sure.  I wasn’t asking him to exude bliss or be immune to life’s snaring boulders.  I wasn’t even requiring unwavering faith.  But I hungered for a sense of guidance, a feeling of connection, a knowing from up above.  I longed for a purposeful life, no longer having to figure everything out because there was a G-d that would direct my path. So I studied my Rabbi, and collected evidence of whispered prayers and true meaning. I logged obeyed mitzvot and heard truth amidst his tears.  I couldn’t trip him up with twisted analysis or catch him abandoning his religion when the rain began.  I came up with intellectual loopholes and incongruence between tractates, sure that I could find an excuse why I couldn’t believe, why this fulfillment wasn’t available to me.   Still, he had a response; even when the response was that there was no answer, there was only because. I questioned from the rationale, a scholar skeptical of ambiguity, craving black and white lines to contain the worldly gray.  I had abundant ‘whys’ and ‘but what its’, praying that he caught my subliminal longings for a way in, for a doorway to belief. 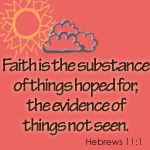 I wanted what he had, but I didn’t want to do what he did.  I wanted the security of community and the meaning of observance without the rules and obligations.  I wanted to know Hashem without having to change my lifestyle.  It didn’t seem to work that way.  I couldn’t think my way into spirituality. I couldn’t grasp the beauty of Shabbos or sip delicious melodies sung in gratitude if I wasn’t willing to show up and make the effort.  And so I stayed stuck.  So we studied and pondered, chatting as often about my life as the words on the page.  He showed up for our lessons and smiled if he caught my presence in shul.  He showed up as a mentor and simply waited, using his life as the urge for willingness, patiently offering Judaism and hoping I would tear off the bow.
When he moved across the country, I mourned my mentor.  I missed the Rabbi who made time for my doubts and saw through my skepticism.  I missed the Rabbi who spoke with passion and lived with one eye up above.  It’s easy to stay stuck when no one points it out, when calls to action are muted, and the questions cease.  It’s easy to wait till tomorrow and plan to believe next week.

But lessons get relearned and answers revisited beneath closed eyelids.  I find our book yesterday, flagged with orange post-its and highlighted passages.  I flip through the pages, no memory of what insights I gleaned or truths I learned, but I remember the lightness.  I can’t repeat any of his answers, but I see my sense of well being, and the sprouts of faith.  I hear his murmured prayers before sipping his drink, and touch my awe blended with yearning.
He was my Rabbi and my mentor, dropping maps of strength upon pauses of weakness.  And I his student, choosing to pick up a map, begin the journey, and start asking questions again.
at 12:26 PM